Prachinburi police arrested 3 suspects after they broke into an ATM and managed to get 700,000 THB. The men used a gas torch to cut the metal on an SCB ATM in front of a CJ convenience store. Police Lieutenant General Roi Ingpairoj, Police Major General Nantawut Suwanlaong, and related officials reported the arrest of the suspects in front of the Kabinburi Police Station on 7 February 2020. The suspects broke into an SCB ATM on 4 February at 3 am. The convenience store is located in front of the Thai Prakong Market, Kabinburi District, Prachinburi Province. The suspects cut off the power source before using the gas torch.

Suspects burned the atm keyhole and cut out a square behind the machine. They gained access to 758,900 THB and left 2,218.60 remaining inside the machine. After the arrest report police took all 3 suspects to the ATM along with the truck used in the crime. The suspects re-enacted the incident as admitted after the arrest. Around the scene were about 50 locals watching how they managed to break into the ATM. Police viewed the security footage and noticed a white Toyota truck parked near the ATM at 1 am. 3 men came out of the car, the first suspect is a large man with a bald head. He wore a factory worker uniform and a mask covering his face. The other 2 suspects are thin and wore long-sleeved shirts, long pants, and masks. The 3 are Sonuek Janchom, Thanajit Potila, and Nopparat Thongcheun.

Somnuek stated after the re-enactment “I worked as an AC technician and installed air conditioners in malls. Before Covid-19 I worked at the incident location. After the pandemic started I became unemployed. As a result, I owe 360,000 to a loan shark. I tried to ask for loans from banks but it didn’t work out. I started searching for ATMs in a quiet area with no protection around the machine. I then invited some relatives to carry the plan out. I drove the truck and went down to survey the area. The other suspects came out and together we carried the equipment used to break into the machine. I used the gas torch while Thanajit and Nopparat helped watch the area. It took 20 minutes to burn the front and another 20 minutes to cut out the back. I grabbed the money and at 3 am we carried the equipment back into the truck”.

FB Caption: He borrowed 360,000 THB from a loan shark and believed breaking into an ATM was the perfect solution. 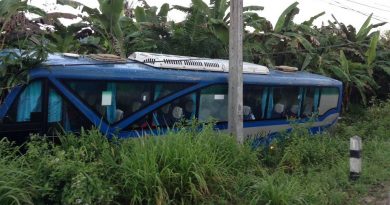 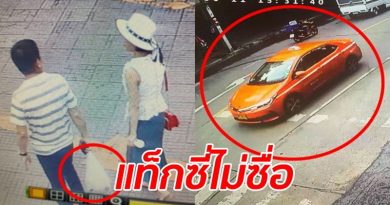