A Chinese call center gang has been arrested in Mae Hong Son Province. The gang has been renting a local resort to use as the base for their fraudulent acts. The Crime Suppression Division (CSD) discovered the main base of a Chinese call center gang operating in Thailand. The CSD reported on 21 June 2021 at 10.30 on the case. All suspects entered Thailand illegally and have been living in different resorts located in the main city of Ma Hong Son.

The CSD received information of foreigners participating in suspicious activity. They have also caused inconvenience for the villagers in the area. These foreigners travelled illegally into the country and locals are afraid of Covid-19. Officials opened a case and started collecting evidence over a period of 1 month. Information showed that there are about 60-80 foreigners who rented a whole resort. They set up a strict rule where no one from outside is allowed to enter the resort without there permission. During the stay, they would always use the phone line 24/7 with multiple calls going on at the same time. Their acts confirmed that this was a call center operation base.

They also hired security guards that kept them safe during their time in Thailand. On 20 June 2021 CSD officials received 6 search warrants for 6 different locations. Related officials surrounded the areas and arrested 53 foreigners. Out of this number 40 were Chinese, 12 Burmese, and 1 Filipino. Officials also found evidence including 300 phones, computers, sim cards, and special equipment used to make fake Chinese passports. There are over 500 pieces of evidence in this case. Most of their victims are Chinese citizens. The main method they use is to create a fake profile inviting in investors. Victims believe that they will make a lot of money through cryptocurrency. 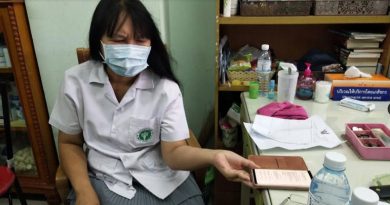