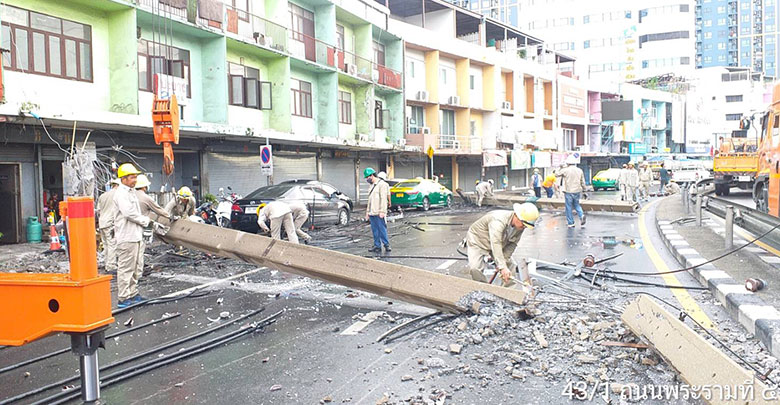 It was raining in the middle of the night when an 18 wheeler lost control and ended up knocking down 6 utility poles. The incident took place on Pridi Banomyong Road right before arriving at the Khlong Tan intersection in Bangkok. As a result of the crash, 6 utility poles were knocked over damaging 2 cars and a motorbike that was following behind. Luckily, no one was injured in the incident. Officials from the Khlong Tan Police Station temporarily closed down the road and officials from the electricity authority rushed in to repair and move the poles.

A witness reported that the 18 wheeler was coming down from a bridge when the driver lost control and crashed right into a utility pole. The pole fell down and pulled 5 others down with it. There were sparks then an explosion sound followed right behind. Chawolit Yuyen 39 years old the driver stated that he was delivering rocks from Om Noi in Samut Sakhon Province to Saphan Sung District. It was raining when he drove down a bridge and lost control of the truck. The truck crashed into a pole, there was nothing he could do but watch the utility pole fall down before dragging 5 others with it.

The accident resulted in a blackout in homes 50 meters surrounding the accident site. The Metropolitan Electricity Authority (MEA) sent officers to immediately repair the utility poles so locals can once again have electricity. MEA also sent in trucks to help move the utility poles blocking the road. This story is yet another reminder to take extra road safety precautions when driving in rain or a wet road, you never know if an accident is about to happen. Luckily, no one has been injured in the accident and this is the most important factor as poles and vehicles can be repaired.

FB Caption: It was raining and the 18 wheeler lost control, luckily no one has been injured in the accident. 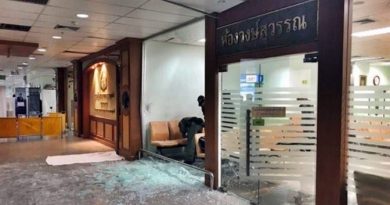