Two groups of teenagers decided to join in boxing fights as a peaceful solution. The teenagers did not get along with each other, but they did not want to engage in dangerous fights with weapons. The groups made sure that the boxing matches were fair with boxing gloves and rules. The groups have had disagreements for a while and there was a fight dare, with a good solution they decided a fair fight would be better for both parties. This is a good way out as there are often group fights between teenagers that end up in serious injuries or even death.

The event took place after midnight on 24 September 2022. Over 100 teenagers gathered on Pattaya Beach in Chonburi Province. Both parties prepared boxing gloves and teeth guards. Not long after the group started gathering, locals and tourists started gathering on the beach to watch. One of the teenagers named Rang revealed to Khaosod News Team that he was not in school and practices boxing every day at the Petch Saman Boxing Camp. The date on the boxing matches were not actually fixed but there was a dare. The teenagers then agreed not long after the dare to use boxing matches to settle it.

Rang then stated that after each boxing match and the whole incident was over all the teenagers apologized to each other. They then went separate ways, and all felt comfortable with no anger left behind. All those who joined in the boxing matches wanted to go in on their own and were not influenced or forced. The main rule they had is that it was ok to give up if they ran out of energy. If one side went down no punches were allowed. Boxing professionals on each group helped make sure it was safe and also gave some tips to those who were less experienced. Both groups along with the viewers helped cheer the boxing matches and no one was seriously injured in the incident.

FB Caption: Instead of using weapons both parties decided it was better to use boxing matches as a solution. 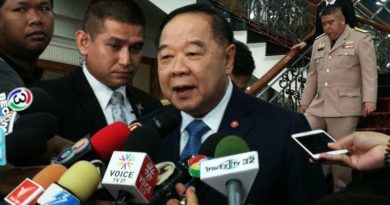