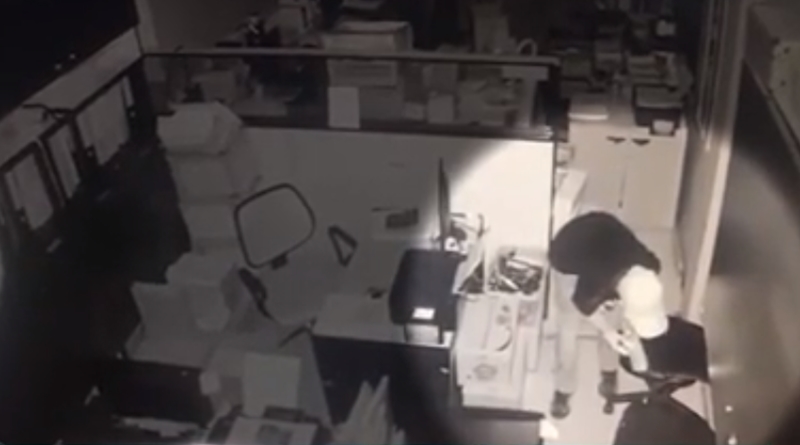 A thief was arrested right inside a police station 5 days after coming out of jail thanks to Royal Pardon. He made the mistake of going to the police station after he had just stolen 800 THB from his workplace. This incident took place on the 19th of this month when the CCTV of a local shop in Chang Moi, Chiang Mai province captured a man at 5.45pm wearing a black shirt, long jeans, and a medical mask in an attempt to hide his face from the camera. The man was seen going up to the 3rd floor where the accounting room was located. The staff inside the shop realized what was happening and locked the thief inside the room. The next morning (20 May 2019) at 8.15am another staff came to open the door, when the thief walked out he said thank you to the staff. When the staff checked the drawers, she discovered that 800 THB was missing and decided to go file report with the Chiang Mai City Police.

On the 22nd of this month, the suspect Sarun 36 years old went to the same Chiang Mai City Police Station to ask for his motorbike that was seized in a theft case where he was using the vehicle when he was arrested in 2018. He was sentenced for 1 year and 2 months imprisonment. The police arrested him on the spot and discovered 800 THB of cash on him. They later found the medical mask that was used on the 19th in Sarun’s apartment. Sarun stated that he had been out of jail for 5 days from a Royal Pardon. When he came out, he had no money and decided to visit a shop where he used to work as an employee before he went to jail. He pretended to be a customer and went into the accounting room. After he searched the room and found 800 THB, Sarun tried to leave the shop but realized it was locked. So he decided to sleep at the shop after he unplugged the CCTV cable.

FB Caption: The police arrested him on the spot and discovered 800 THB of cash on him. They later found the medical mask that was used on the 19th in Sarun’s apartment.