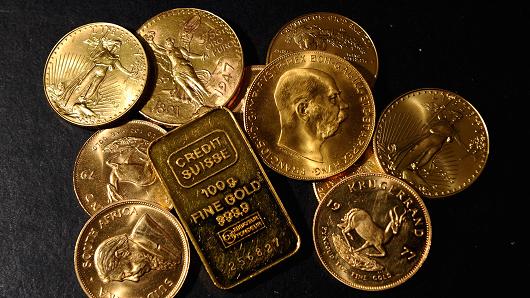 (Reuters via CNBC) – Gold prices edged higher early today (May 19) and were on track for their biggest weekly gain since mid-April as the dollar softened and stocks eased amid the ongoing political crisis in the United States that weakened risk appetite.

The yellow metal was up about 1.8 percent for the week thus far.

The dollar traded above six-month lows against an index of six major currencies today but was down 0.1 percent after gaining some reprieve overnight, helped by solid US economic data.

US President Donald Trump, striking a defiant tone yesterday after days of political tumult, denied colluding with Russia during his 2016 campaign or asking former FBI Director James Comey to drop a probe into his former national security adviser.

Michael Flynn and other advisers to Trump’s campaign were in contact with Russian officials and others with Kremlin ties in at least 18 calls and emails during the last seven months of the 2016 presidential race, current and former US officials familiar with the exchanges told Reuters.

In Thailand the Gold Traders Association in announcing the trading prices of gold for May 19 at 9.22 a.m. said that they have dropped by 150 baht from yesterday’s levels, INN News said.

Cheap PPE scam with over 800K in damages.