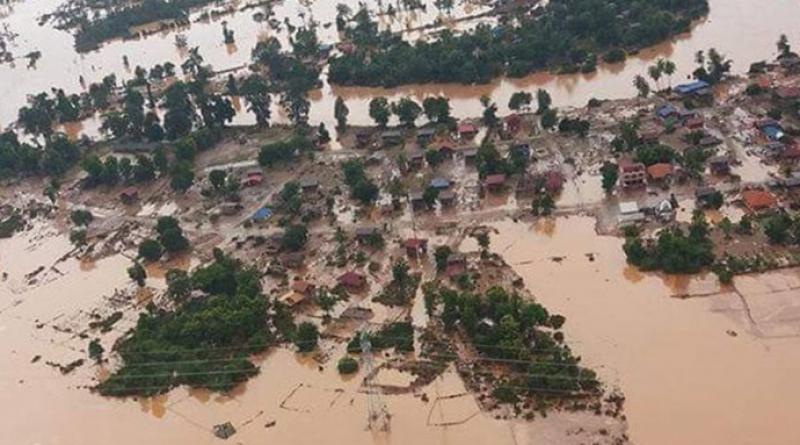 THE collapse of part of the hydroelectric dam in Laos on July 23 has sent stock prices of the Korean firms involved in the dam construction reeling as they have been accused of substandard construction and the consortium, which included a Thai firm, may have to be held responsible for the massive flood damage.

Laos, where Mekong River runs through from China to Cambodia, has been branded as the “Battery of Asia” as many dams have been built on the Mekong and other rivers to generate electricity for sale to its neighboring countries, especially Thailand.

The collapse of part of the Xe-Pian Xe-Nomnoy dam has also been seen as a setback for plans to build more dams on the Mekong River as opponents for a long time said the dams will eventually damage the great biodiversity and precious resources of the river. A total of 11 mainstream dams and over 100 dams on tributaries are planned, which scientists warn will imperil the already fragile river system. The Mekong ranks as one of the world’s most productive inland fisheries as its basin banks support a population of 60 million Thai, Laotians, Cambodians, and Vietnamese, experts say.

The Xe-Pian Xe-Nomnoy dam is being built in Southern Laos to divert the Houay Makchanh, Xe-Namnoy and Xe-Pian rivers into reservoirs to feed a 410-megawatt power plant, which will generate up to 1,879 giga watts of power a year.  Most of the power will be sold to the Electricity Generating Authority of Thailand (EGAT) for 27 years starting in 2019. The project accounts for 17% of the Mekong River’s annual flow.

The project costs US$700 million or around 22,000 million baht. Most of the financing for the project came from a syndicated loan from the Thai lenders, namely, the state-owned Krung Thai Bank (KTB), Bank of Ayudhya (BAY) also known as Krungsri, Thanachart Bank and Thailand’s EXIM Bank. Stock prices of Ratchburi Electric Engineering (RATCH) and the three Thai banks listed on the Thai stock market had not been affected last week.

The SK company profile in its website says it provides construction services for power plants, civil infrastructure such as railways, roads, harbors, and housing industry.

Mr.Somkiat said in his observation on his Facebook page that where dam construction is concerned, Thai construction companies may have more experience, especially dam construction, in this region as the Thai firms are more familiar with extreme weather conditions.

In this project, most of the construction works are under the management of SK Engineering and Construction while the Thai firm is believed to be responsible for the electricity grid part like cabling.

For nearly 24 hours, after heavy rain, engineers from South Korea and Laos raced to save one of the so-called saddle dams designed to hold diverted river water, which had shown signs of damage before it cracked on Monday night, prompting a rescue operation for thousands of stranded villagers. The unfinished dam proved unable to withstand torrential rains that had pounded the region for days, raising questions over safety standards.

The following day, eight villages had been flooded, killing six people and leaving over 6,000 people stranded.

Brian Eyler, a director at the Stimson Group research center in Washington, said the dam operator should have known that intense rains were approaching and taken appropriate action. “Beyond any doubt, this was a man-made disaster,” WSJ quoted him as saying.

Mr Eyler’s comment was also along the line with Laos’s Minister of Energy and Mines Khammany Inthirath, who said the devastation was due to substandard construction as the dam did not function well after southern Laos was inundated with heavy rainfall.

He said the companies that constructed the dam will not be in a position to deny their responsibility for the incident but SK Engineering & Construction said it was too early to say what had caused the accident. The cause of the accident will be investigated, the company said.

First in-text: Laotians sitting on the roof of their home as they wait to be rescued. Photo: tnnthailand.com