A thief entered through the roof of a phone shop and managed to get away with over 50 phones. After taking the phones, the thief searched the shop and found the owner’s personal 5 Baht gold which is 15.16 grams per 1 baht of gold coming to a total of 75.8 grams of gold. The incident took place in Bangkok on 9 October 2019.

The INN News team went to the store located in between Soi 15 and Soi 17, Bang Kradi Road. The store is opened inside a rental space, the owner comes to open the shop and leaves after it closes, therefore no one was in the store when the thief broke in. When the police arrived they checked the roof and discovered there was a 50 x 50 centimeters hole on the roof.

The thief lifted the roof just enough to pop himself in. He then made a hole in the ceiling from the inside and jumped straight into the phone shop below. The security cameras caught the thief wearing a long white shirt and shorts. At first, he was walking in front of the store before disappearing onto the roof. The security camera inside the phone shop then caught him jump down into the store.

Officials from Sam Dam Police Station reported that the investigation team has found positive information leading to who the suspect might be. They are working on arresting the man along with finding more evidence to pin him down when the time comes. The police are confident in the case and are making quick advancements leading to the arrest.

Theerapong Kokkaew the owner believes that the thief is a customer or a local in the area. The thief moved all the phones outside and placed it by the shop wall. He then came back twice on a bicycle to take the items back to where he came from. The thief knew exactly what time the shop opened and closed. Theerapong has been running the phone shop for 2 years, amongst those years he has never had a conflict with anyone in the area.

The thief managed to get away with at least 50 phones including phones made by Huawei, Samsung, Vivo, and more. Together with the gold, the damage is worth at least 300,000 THB. Theerapong the owner hopes the police arrest the thief soon.

Other sellers in the area reported that villagers have been losing their bicycles, the thief might be the same person. This causes fear to locals because the latest case in this incident the thief got into the shop from the roof. Locals don’t know how to stay safe when the thief is entering from the top of the building.

FB Caption: He came back twice on a bicycle and took the items back to where he came from. 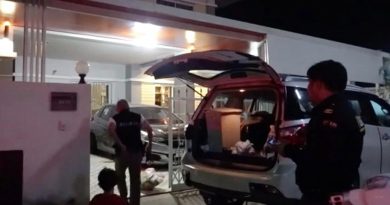 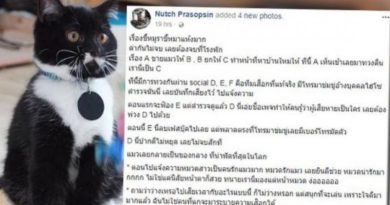 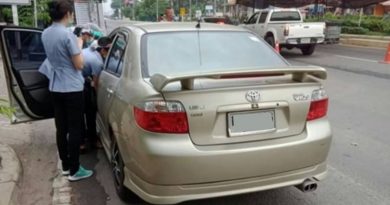 Baby is born! at Covid-19 checkpoint.