A landlord almost fainted when she opened a room that was filled with trash, so much that there was no room to walk. The renter abandoned the room and has not paid rent. The room is located in Prachinburi Province. The story was shared on Facebook with the caption “I’m tired, he shouldn’t have done this”. The post went viral shortly after it was shared online. The Khaosod News Team visited the room on 25 June 2022. The building is one story tall with 22 rooms and room number 4 is where the incident took place.

The News Team entered inside and there was still dust and spiderwebs. The bathroom had a cracked toilet and looked liked it has never been cleaned. Behind the room are marks from trash left behind for so long. The owner had cleaned most of mess including the garbage removal on the 24th. Dogmai 53 years old the renter stated the renter has been living in the room for about 2 years. He recently lost his job as a driver for a local company due to poor health. He informed the owner of his job and asked to delay paying the rent. After a while he disappeared and would not answer the phone.

On the 24th a relative of the renter contacted her and asked to open the room to get a motorbike stored inside. After unlocking the room she was shocked as there are trash pile, so much you couldn’t see the floor. Most of the trash was food packaging consisting of plastic and foam boxes. Dokmai revealed she is not rich and renters should not leave a huge mess for the owner to clean. She hoped the renter does not repeat his actions with another landlord in the future. She managed to receive only 2,000 THB from the relative and the renter is still missing.

FB Caption: The renter never paid rent for 2 months and then abandoned the room. 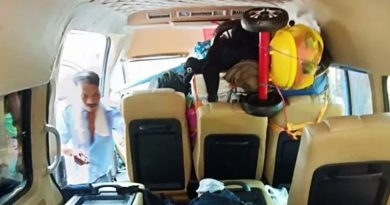 11 Myanmar workers pass out in Van all at once.