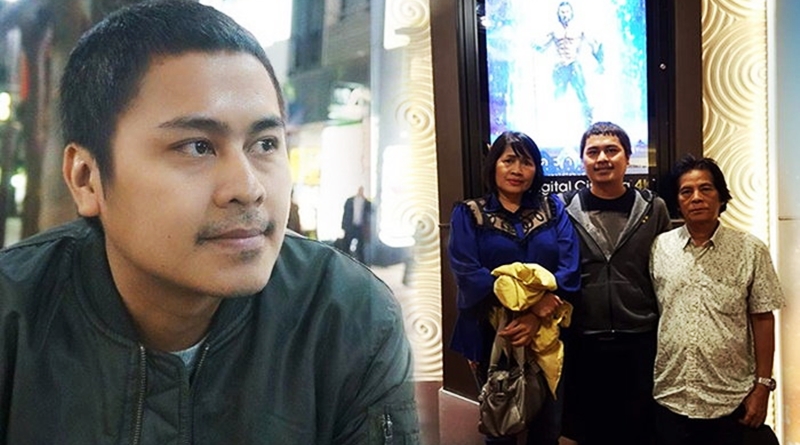 Wongsakorn Wonsagong, a Thai man who is involved in the CG (Computer Graphics) production for the famous DC Comics film in cinemas today “Aquaman”. Wongsakorn posted a picture on his personal Facebook of him standing in front of the Aquaman poster inside a cinema with his parents by his side.

He included a long meaningful caption that states “I had the opportunity today to return to my birth country to meet the real superheroes of my life. This is my mother and father, I am extremely happy with my involvement in the CG productions of Aquaman and for my family name to be in the credits of an international movie. My parents taught me so many lessons through my life, where the best memorable one was “In our lives we can be good at anything, so choose what that shall be” this sentence has always been with me through my life and I applied it to everything I do, and it has brought me standing here to today… I love you more than anything in the world, My superheroes. Aquaman is a superhero based in Hollywood, the inspiration for Wonsakorn’s caption to his parents. After posting the picture, he has received numerous comments and shares on Facebook. He later posted another status update to declare some additional information to his followers. “Many sources have shared my post, I  I am greatly thankful for this, but I want to add some information which is that there are members involved from all over the world including another Thai person who I call my brother named “David”. Many may already know of him and there might also be more Thai members in other Hollywood studios. Thank you to everyone who liked the CG and VFX in the Aquaman film and lastly I would like to send the kind comments to everyone involved behind the scenes as I believe we are all very proud and happy to hear the positive feedback from the viewers.

FB Caption:  “I had the opportunity today to return to my birth country to meet the real superheroes in my life. This is my mother and father”.